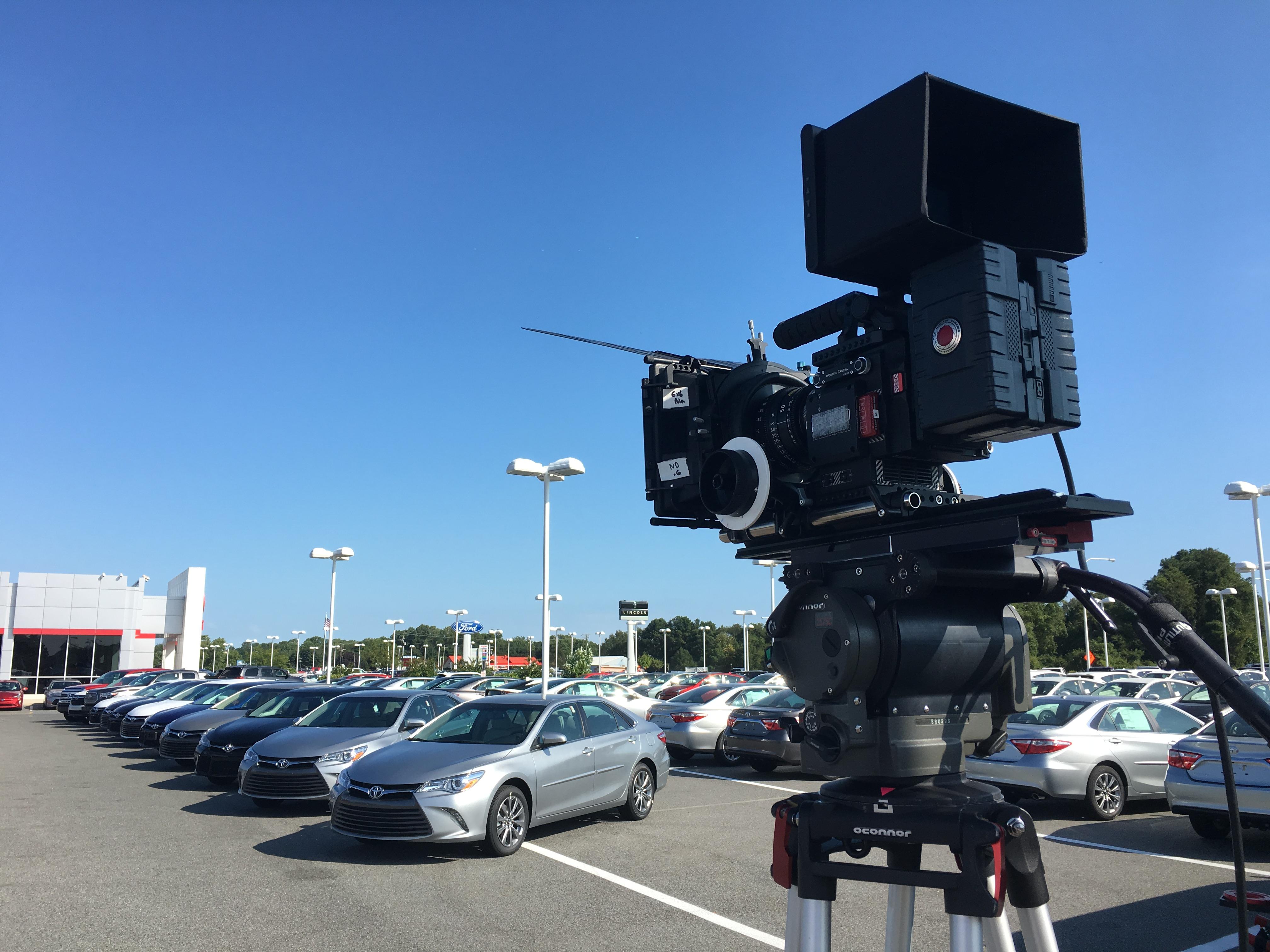 Producers and 186 Advertising Team Up for Flash Savings Campaign

That’s the amount of real time footage you’ll see in PRODUCERS ‘ thirty second Flash Savings Event spots created in partnership with 186 Advertising for the Central Atlantic Toyota Dealers. “We worked through several concepts and landed on an event that felt big, bold, had impact visually for broadcast and would be sticky across digital channels” details Rip Lambert.

The spot’s concepts were first born in August after a brainstorming session between Executive Producer of Post Production, Karen Phillips, spot director and PRODUCERS President Rip Lambert, and members of the 186 Advertising crew. “The multi-spot campaign is a mixture of big shots, vehicle product shots, real-time live action composited with time-lapse crowds and imagery,” explains Lambert.

With such a heavy endeavor, all departments quickly became involved in the preproduction process. Executive Producer of Production Ross Jones and his team of Ray Jones and Derick Esch filmed tests in the studio of customers (whoever wasn’t too busy around the building that day) in a mock Toyota showroom. Editor Dominic Anello and Compositor Justin Sweeney would then experiment on the footage with different ways to speed, blur, and layer the footage until they came up with the best method for getting it done right.

Anello would later refer to all this work as “the perfect example of how investing time into pre-production will set up a project for success.”

Production would have to be spread over two different days at two different Toyota Dealerships, one for exterior shots and one for interior. It would be the interior shoot that would be the biggest challenge. “The interior dealership shots included a set build, green screen shots and a good deal of vehicle moving around to get the required shots,” illustrates Lambert.

Because of the complexity that would also come in Post Production, Sweeney joined the production team on set to manage how the extras interacted with the green screen. Sweeney would eventually layer 4 pieces of footage and graphics to create the final interior scenes, including time lapse of the extras shopping for cars throughout the sales floor and the principals standing next to the featured vehicles. It was the first time he’d been on location for Producers. “It was a lot of fun to be involved with all the moving parts on set and to get a sense of the huge scope of work the production team undertakes,” remarks Sweeney.

With hours of footage in the bank captured by PRODUCERS ‘ RED Weapon cameras, the project moved on to the post production phase. The work fell back to Anello and Sweeney, with additional editing work by Dave Hudson. The test for Anello came not just in the actual editing work, but managing the large amount of data from the filming. “Each 2 second shot required processing anywhere from 2 minutes to 2 hours worth of raw material, increasing the amount of time it took to render effects, output files, and even just copying files to and from our server,” he says.

Sweeney had his work cut out for him as well. Along with the layers of footage from the shoot, he also had to add day-to-night time lapse footage of the sky, create graphics to fill the green screen and build 3D set extensions for the showroom ceiling and Flash Savings digital dispays.

With Anello, Hudson, and Sweeney finished with their work, Bob Bragg stepped in to sound design and mix the spot. Kirk Davis completed the final look in color grading on Pablo Rio.

“From the very beginning, administration, production, editorial and graphics came together, proposed and argued over ideas, compromised, strived for excellence, and always stayed focused on the clients’ needs and wants,” muses Anello, “It brought us closer together, personally as well as professionally, challenged us to think outside the box, and to bring our best to the table every single day. I think this is a piece that everyone who was involved is proud of.”

Take a look at one of the spots in the series here, and keep a lookout for the spots running on TV throughout the month.